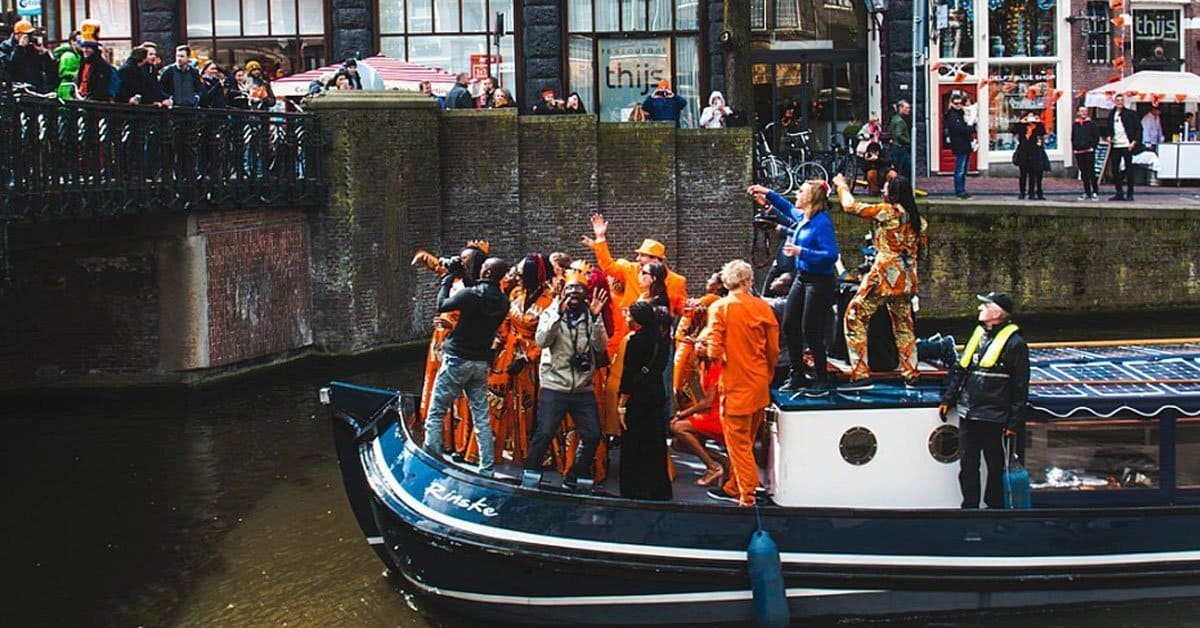 King’s Day or, in Dutch, Koningsdag, is a Dutch National Holiday celebrating the birthday of King Willem-Alexander. The Dutch have been celebrating the birth of their monarch since 1885 and I can truthfully say that they’ve perfected the art of showing pride in your country. Imagine an Independence Day where, instead of celebrating our independence from royalty, we celebrated how much we absolutely love our King and, where instead of watching a parade, the entire country becomes the parade by taking to the streets to drink and dance all day. If you also imagine that everyone – literally everyone – in the country is wearing red, white & blue from head to toe, then you are close to understanding what it’s like to be in The Netherlands on King’s Day.

King’s Day doesn’t seem to be a well-known holiday, like Carnival in Brazil,  in the United States and that’s our loss because my visit to Amsterdam over King’s Day in 2016 was one of the highlights of my travel experiences. Here’s why you should go and some tips to plan your visit.

We took a bike tour of Amsterdam (much recommended) and our guide shared with us this delightful bit of gossip: the Dutch people don’t really like the King all that much. They think he’s slow and his children are ugly (so my source says) and don’t hold a candle to the much-beloved Queen Beatrix. That’s obviously no reason to not celebrating his birthday with a giant party each year.

King’s Day is celebrated all over the Netherlands, but Amsterdam has the biggest and wildest parties. The King typically visits a smaller Dutch city on that day for a ceremony.

When Should You Go?

If this is your first visit to Amsterdam, you’ll definitely want to arrive at least a couple of days before King’s Day so you can tour the city. And be sure to get to Dam Square before King’s Day. A carnival sets up in Dam Square about a week before King’s Day and the contrast between the gaudy rides and the elegant square is delightful. Take the time to ride the Ferris Wheel because you’ll get a wonderful view of the city that you can’t get any other time of year.

It’s best to check out the carnival before King’s Day because Dam Square will be almost unbearably crowded on the actual King’s Day holiday. Almost 700,000 people pour into Amsterdam on King’s Day and most of them seem to end up in Dam Square at some point.

You might want to arrange your stay so that you’re still in Amsterdam on April 30, the date when Queen’s Day was previously celebrated. We had already left at that point but heard from several people there that throngs of folks still show up on the 30th looking for the party and so some events are scheduled for that day as well.

What to Wear on King’s Day

Orange, orange and more orange. Orange is the color of the House of Orange-Nassau, which rules over the Netherlands, and the entire country dresses in orange on King’s Day.Every store sells tons of fun orange outfits and accessories so you may want to pick out your orange outfit in Amsterdam. You’ll have so many choices. And you should absolutely feel free to turn your outfit into something fun. I added a simple tiara but I saw a multitude of orange feather boas, as well as more extreme outfits like these fun girls dressed as the cast of Orange is the New Black.

You’ll also want to wear layers. Dutch weather can be unpredictable in April. When we were there, it didn’t get much above 50 (if that) but past King’s Day holidays have had temperatures well into the 70s. We were lucky enough to be in Amsterdam in 2016, for the coldest, rainiest King’s Day on record and I can honestly say the excitement of the day (and possibly a couple of street beers) was more than enough to keep me feeling just fine.

What to Do on King’s Day

King’s Day actually starts the night before April 27 with King’s Night which features multiple street parties and canal cruises. We booked a Canal Boat Dinner Cruise on King’s Night with Holland International before we left and I’m so glad we did. We drank champagne, feasted on traditional Dutch food, and glided along the canals taking in the view. The cruise ended around 10 p.m. and we could have headed out to parties afterward, but we are middle-aged people and so we headed back to our apartment so we could rest up before the big day.

The next morning we woke up,  dressed in our finest orange clothing and took off for Vondelpark. All of Amsterdam turns into a giant street market on King’s Day, but Vondelpark is reserved for the children. Each child takes a little square of the park and turns it into their own small business. Most of the kids are selling their old toys, but some of the kids show amazing creativity. I saw tons of carnival type games, lots of dancing, cello playing and even two kids posing as statues. (Note: if you want to take their pictures, be prepared to drop a euro or so into their pot. This is a money-making venture after all.)

We spent a good hour in the park and then headed out in search of a tompouce, a sweet pastry filled with cream. They are decorated with orange frosting in honor of King’s Day. We found a street vendor selling tompouces and I can report that they are indeed delicious, especially paired with a scandalous (for me) pre-lunch beer. It’s completely fine – and expected – to walk around with a beer in your hand during King’s Day and when you finish yours, you can easily pick up another from a street vendor during the next block.

After lunch, head over to the canal – any canal – to watch the canal parade. You haven’t lived until you’ve seen a canal filled with boats packed with revelers dressed in orange as far as the eye can see.The boat riders interact with the watching crowd and it’s clear that everyone’s having a good time.

If you decide you need a break from the crowds, you might want to schedule a trip to a museum. Most of the big museums such as the Van Gogh museum and the Rijksmuseum are open and can actually be less crowded on King’s Day than other days because most people are out partying in the street. We popped into the Van Gogh Museum and it was a nice, quiet break from the craziness outside.

At night, there are dances and concerts and fireworks; you might want to schedule a break during the day so you’re fresh for the evening. You can easily spend the entire day just walking around and taking in the scene, though.

Things to Know about King’s Day

It is really crowded. Walking a city block can easily take an hour in some spots. But everyone is so jovial that the best thing to do is to just go with the flow of the crowd and enjoy spending time with your fellow celebrators.

Expect to walk. A Lot. Because of the crowds, buses and trams stop well before the city center so if you are coming in from outside the city, you’ll have to walk into the city. This is the one day you don’t have to worry about bicycles, though. They aren’t allowed either due to the crowds.

Toilets are readily available but you typically must pay to use them. Bring a few coins for this as you won’t be able to get change.

Embrace and enjoy the craziness!