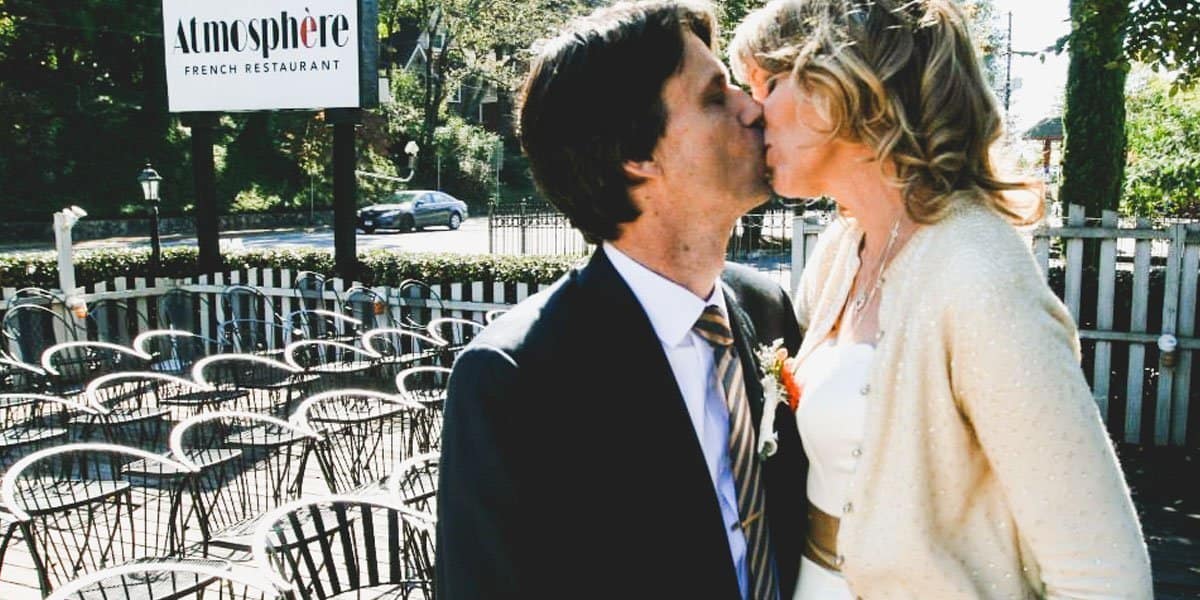 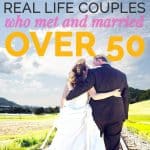 I called in sick on Valentine’s Day in 2009 and spent the day in my bathrobe mindlessly watching TV and, yes, actually eating ice cream straight out of the carton, because I was so depressed about one more year going by without someone to share the holiday with. So, you’ll forgive me, I hope, when I tell you that I wake up every Valentine’s Day now singing with happiness. It doesn’t even matter if we do something to actually celebrate (sometimes we do and sometimes we don’t and that’s totally ok). I’m just grateful that I found love again after so long.

So, if you’re deep into your own ice cream carton right about now, let me give you a bit of hope with these stories of 20 couples who found love and married after 50. There are tips to be gleaned from each of their stories and I’m going to post a follow-up on Thursday with lessons we can all learn from these couples. 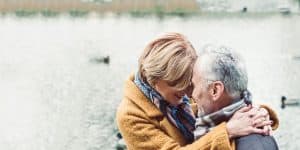 How to Find Love When You’re Dating Over 50

A First Time Bride at 50

Treva Brandon Scharf became a first-time bride at age 50 and walked down the aisle in a gorgeous vintage original Bob Mackie wedding dress loaned to her by her step-mother. She imparts all her dating wisdom at The Late Blooming Bride and you can read her full love story on Gigi Schilling’s blog, So Ageless. Gigi also wrote Ageless Bride, a guide for the bride over 50.

Gertrude Mokotoff and Alvin Mann met at the gym and married in 2017 at the ages of 98 (Gertrude) and 94 (Alvin). He teases her about being an older woman. You can read their full story here.

A Beautiful Bride at 60

Cindy Joseph, former model and founder of a great cosmetics line for older women, BOOM by Cindy Joseph, went with a traditional bridal gown too when she wed her long-time love at the age of 60. You can read her story here.

Beloved news anchor, Katie Couric, married her long-time beau at age 57 and rocked a beautiful white gown at the ceremony, proving that you can be a princess on your wedding day, no matter your age. Read about her wedding here.

Opening Her Heart to Love

Here’s a love story that warms my heart. Laura Lee Carter met her husband at 49 after years in abusive relationships and recently celebrated 13 years together. You can read their story here. Laura has also written a book, Believe in Love Again, that chronicles her journey to opening her heart.

Getting Married in the Perfect Dress at 51

51-year-old bridge Raffaella Barker is proof that no matter what you choose to wear, you should make sure you love it as much as you love your groom. You can read her journey to find the perfect dress here. 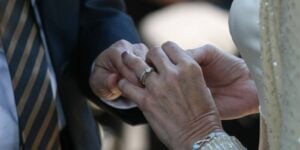 Second Marriage Success Tips: How to Avoid Divorce When You Remarry

Considering remarriage after a divorce? If so, you may be wondering how you can ensure this marriage lasts even though your first marriage ended. These tips can help you avoid…

Marrying on a Greek Island After 50

I’m a big fan of Elaine Ambrose’s writing so of course, I loved reading her story of finding love in midlife after divorce and marrying on a Greek Island.

Celebrating with Family at 60

I’m also a huge fan of Ann Hood’s writing so I loved reading the New York Times announcement of her love- and family-filled wedding at age 60 to fellow author Michael Ruhlman.

Calling in Love with The Law of Attraction

Lori Peters used The Law of Attraction to find her husband. They married the day after her 53rd birthday.

Santos and Francesca dated all through high school, but then broke up when he joined the army. He contacted her on Facebook almost 50 years later. They married in 2011.

This Great Grandmother Who Knows She Can Still be Beautiful

Only someone with a cold, dead heart wouldn’t be moved by this beautiful tweet.

Finding Love After the Death of a Spouse

Jill Smolowe found love again after she was widowed at age 54. She joined two dating sites and 10 days later connected with the man she eventually married. She’s written a book, 4 Funerals and a Wedding, about her experiences with grief and finding love again.

Marci Rich is another online dating success story. She met her husband via Match.com. After they married, she started a website, The Midlife Second Wife, for women who remarried in midlife. 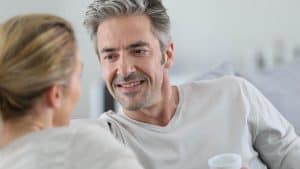 A few years ago, the New York Times published an article called To Fall in Love with Anyone, Do This. Apparently, the best way to make anyone fall in love with you…

Their Chemistry was “Unmistakable”

Barbara Zamost met her husband through friends. She opened the door and the chemistry was unmistakable. I love her advice for finding love the second time around:

“Address any hurt, anger or trust issues in yourself, and look for patterns. Then, look for something different. People have unfinished business, and it can get in the way of an amazing relationship. You have to be in the right heart space. I felt really good about where I was when I met Alan.”

Felice Shapiro was widowed with two teenage sons when she met her second husband. He stepped up to be a great step-dad two her kids.

Getting Clear on What She Wanted

Lorraine Diederich took the time to work on herself and get clear on what kind of man she wanted to be with before she looked for love. When she finally felt ready to start looking, she met her soulmate.

An Email from Out of the Blue

If there’s one thing we can all be happy about in this day and age, it’s that email and social media make it so much easier to find old flames. Maureen Justice and Hugh Robertson were sweethearts in England but their love affair ended when her dad was transferred and they lost touch. Fifty years later, she reached out to his sister on Facebook to see what had happened to him. The next day, she opened an email and the rest is history. I love this quote from her:

“We sat watching television the other day and I said to Hugh, ‘I can’t believe I can feel this happy sitting here doing nothing.”

A Phone Call from an Old Flame

Donna Hanover had just suffered through a blistering divorce from then-New York Mayor Rudolph Giuliani when she got a phone call from the guy who dumped her during her freshman year of college. This time, he was calling to see if she wanted to meet up for coffee. And to apologize for making her cry so many years ago. They married soon after.

How The Midlife Rambler Met Her Match

And then there’s my own story. As I was researching this post, I was struck at how many stories were similar to my own. I also married a guy I had dated in college after we reconnected on Facebook. As it turns out, our lives had been very similar: we had each lived in Suburban Atlanta about 5 miles from each other and then both moved back to the city after our divorces. Our new places were also about 5 miles from each other!

Somehow, though, we never ran into each other and I’m glad because the time wouldn’t have been right. After a long, unhappy marriage, I needed to take time to work on myself and become the woman who truly believed she deserved a good man. And I needed to become clear on what I wanted in a partner.

I finally felt ready for love and would try online dating off and on. But each time I met a new man, no matter how excited I would be, I always had the same word pop into my head as soon as I saw my date. That word was “Nope.”

Do you have a story about finding love after 50? I’d love to hear it – share it in the comments!